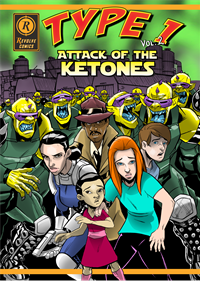 A sequel to a comic developed by diabetes experts in Southampton and Portsmouth to help young patients' understanding of the condition is set to be released tomorrow (Wednesday).

Type 1: Attack of the Ketones will be unveiled online to mark World Diabetes Day and follows the acclaimed first instalment Type 1: Origins, which was published in 2016.

Based on the title of hit Marvel series Wolverine: Origins, the comic, Type 1: Origins, featured the story of a young man, Gary, who comes to terms with his diagnosis and his “special powers” of shock, surprise, acceptance and understanding of how he will cope.

The new edition will focus on raising awareness of ketones, a chemical produced by the body when, due to a lack of insulin, it is not able to use glucose as its source of energy and instead starts breaking down fat. If left untreated, it can result in a life-threatening condition known as diabetic ketoacidosis.

Both comics have been developed by Dr Mayank Patel, of University Hospital Southampton NHS Foundation Trust, and Dr Partha Kar, of Portsmouth Hospitals NHS Trust, in collaboration with patients and with the support of publishing company Revolve Comics.

Type 1 diabetes, which usually develops before the age of 40 and affects around 400,000 people in the UK, occurs when the body is unable to produce insulin to regulate the level of sugar in the blood, known as blood glucose.

Too much glucose can lead to organ damage and, as there is currently no cure, patients are required to take insulin on a daily basis and make healthy lifestyle choices such as reducing sugar in their diets and not smoking.

"We had a great response to the first comic, seeing in used not only across the UK but internationally, and we continue to receive enquiries about it two years down the line,” said Dr Patel, who is based at Southampton General Hospital.

"We have found many people get confused about the two different types of diabetes and, as a group, people with type 1 diabetes can feel excluded and forced to deal with ignorance about their disease on a regular basis.

"This can be hugely frustrating and the hope is that these comic books will provide another means of spreading the type 1 diabetes message through art and that the story will inform and educate anyone who reads it."

“Ketones represent risk in type 1 diabetes so we have tried to convey the value of being aware of them,” he said. “The key demographic is older children and young adults but it should be informative to anyone.

"Additionally, we have made specific reference to insulin safety in type 1 diabetes in hospital, so we are also keen to reach healthcare professionals who may care for inpatients with type 1 diabetes.”

Dr Patel added the development and release of Type 1: Attack of the Ketones was also the "perfect tribute" to American comic book writer Stan Lee, a former editor-in-chief, publisher and chairman of Marvel Comics, whose death at the age of 95 was announced yesterday.

He said: "Stan Lee was a legend. We felt inspired by the legacy he started and to be able to use the medium of comics in healthcare has been a true privilege."

The comic will be available from tomorrow (Wednesday) at www.revolvecomics.com.